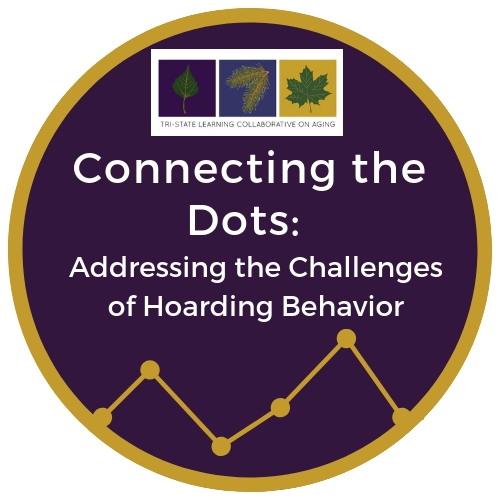 Past Webinar: Connecting the Dots – Addressing the Challenges of Hoarding Behavior

Public and private agencies and inter-disciplinary task forces across Northern New England are tackling the issue of hoarding through educational workshops, public awareness campaigns, and peer and individual support.  For those who have friends, family or neighbors who exhibit hoarding behaviors, the challenges of assisting an individual are well-known. What is less well-known is how to assist people with hoarding behavior and what underlying issues trigger this behavior.

According to Roberta Baker, a journalist with Silver Linings, a NH based publication that raises awareness of issues related to aging, “Hoarding, the compulsive accumulation and inability to get rid of things, including items considered worthless by others, is a mental illness affecting at least 2 to 6 percent of the world’s population, including seniors. The numbers are likely higher because hoarding usually goes unreported until it becomes a crisis, mental health experts say.”

Join us on October 19, from 12-1:30PM to learn more about hoarding and what folks in our states are doing to address this challenge.

Speakers:
David O’Leary:
David also serves as co-coordinator of the Chittenden County Hoarding Task Force, the first of its kind in Vermont. David offers an approach to hoarding & squalor intervention based on evidence-based

David is a Housing Retention Specialist with the Burlington Housing Authority who specializes in hoarding and squalor cases.techniques, but believes that a humanistic & compassionate foundation lies at the heart of his work.

Lora has run a workshop for 2 years called “Buried in Treasures”.  This workshop is offered through the Aging Resource Center at Dartmouth-Hitchcock Medical Center.  Based on the work of Smith College psychology professor Randy Frost, a nationally recognized hoarding expert, and his colleagues, the course is poised to become a model for workshops offered through hospitals and senior centers throughout the region as graduates train to lead workshops in their

Lora is the Program Leader for the Northern New England Geriatric Education Center at Dartmouth-Hitchcock Medical Center in Lebanon.communitiies.